Okay, so as some of you already know and others will know momentarily, I will be competing in Race Across America in 2012.  Yes I am crazy and no I am not mentally insane and doing it solo.  I will be competing with 2 of the 3 team mates that I did RAW with in 2010 and one new rider to the team.  We are doing this to raise funds for 8 children in Tallahassee, FL who are battling Leukemia to help them and their families with this struggle that they have had, are having and will continue to have.

Training recently has been very rough since days has been long and sleep has been minimal but this weekend has me more motivated than before(not sure why).  It has been a lot of early morning roller rides and then some long rides on the weekend but will only be ramped up from here on out.  I can not thank Janelle enough for everything she has been doing.  She has been taking care of Kate and the entire house so that I can focus on work and training and then spend the time that I have with her and Kate doing more enjoyable things, like hanging out and playing.

Katelyn is by far the cutest mouse there ever is and was for Halloween.  Tuesday, I worked late which meant I was able to go to baby time at the library in the morning with Janelle and Kate and got to take pictures of the parade as they all went through the library in their costumes.

Today we walked up the street to one of the local churches “Trunk or Treats.”  Styling her cool mouse costume she was all over the place and caught on pretty quick on how to trick or treat.  The only problem was that she wanted more candy than was given.  I guess what sane child wouldn’t though, I would want more too!  With some pumpkin carving and home made cinnamon rolls in there the whole weekend couldn’t have been any better.  Not a bad way to spend my first true weekend off in 2 months. 🙂 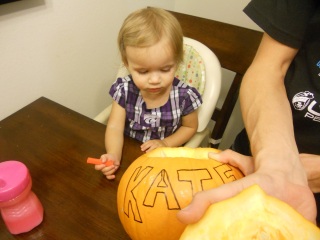 Now, off to bed and tomorrow night will entail some more trick or treating and fun with Janelle, Katelyn and some friends.