RAAM training weekend two was a great one.  It was trying both physically and mentally this go around.  Thanks to some BEAUTIFUL weather, some locals considered cold, we were able to get a lot of miles in without sweating to death.  The weekend consisted of a 40k time trial, 125miles of saddle time and 100miles on the TT bikes totaling over 250 miles by the time it was to be all said and done.

Friday afternoon three of us were able to meet up for the TT, Halsey had his daughter’s birthday, so it was up to the three of us to knock out the TT and each other!  We switched the order from the last go around with Austin starting us off, me going second wheel and Jamey bringing up the rear.  The weather was perfect and for January I couldn’t complain about being in my riding kit and arm warmers.  I got up to speed quickly and settled in fast tapping out a steady rhythm on the pedals with the main goal of pushing throughout the whole ride and staying in the TT position that I had only spent a total of 2 hours in up until this point.  After 10K I had pulled in Austin and continued to put the power to the pedals.  I hit the turn around point at 20k and was expecting the relief of a tailwind… boy was I wrong!   What I thought was a headwind must have simply been the “wind” that I was generating as I was rolling down the road.  I turned around to find a headwind again which was a little more defeating than I hoped for.  I passed Austin going the other direction about a minute later and Jamey was hot on his heels in pursuit.  I crossed the finish line at 1:00:10 and was pleased with that since the last 20K was over 30min.  Doubling the distance and decreasing the time is always a great way to do it!  What made me even happier was that it was the fastest time on the day.

Saturday was a whole different story… I learned the hard way the importance of nutrition and hydration.  The morning started off cold at 27 degrees and on our 1+hour ride to the group ride I did not drink more than 1/4 of a bottle of drink.  I tried forcing down more fluids while we waited but the slushy that was in my bottle was not very appealing with it still being below 30deg.  I sucked down a gel quickly and we hit the road. The first hour was high intensity and again I forgot to focus on the necessities.  We got to the final turn of the day with less than 15 minutes in the group ride and I dropped.  With no fuel in the tank there was no way I could hold and I sat up and focused on getting as many calories in as possible.  I polished off the first bottle and got halfway through the next before I sucked down 2 more gels and met up with the guys again to plug along.  At this point it was too late and I was in the hurt locker.  3+ hours down and I had not had nearly enough to eat and still was barely halfway through the ride.  We plodded along and thanks to Jamey we kept the pace high enough.  He did the lions share of the work that day and kept me moving throughout.  After one stop and picking up 2 monstrous Rice Krispy treats I felt a bit of a revival.  The final hour I was able to go back up to the front and put in a little bit more work to help get everyone through the 125 mile day.  We wrapped up quickly and headed home to kick our feet up for the next day.  I was cooked to say the least.  My legs were roached, I was mentally beat and I wanted to be done for the weekend… so much so that I considered calling and saying I was sick. 🙂 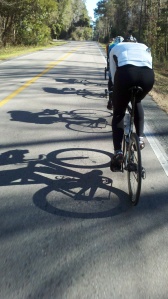 Sunday morning I woke up and my legs were sore to the touch.  I had no desire to get on the bike and I was wishing I had some way out of it.  I pulled out of the driveway and headed for our meeting point.  It was cold that morning and as we rolled out of the parking lot I was chilled to the bone.  We were joined with a fifth rider, Steve Barraco, and were glad to have the extra body.  We rolled along slowly for a few minutes and Jamey went to the front again to pick up the pace and also our core temperatures.  The first 30 minutes were brisk at a minimum with the garmin reading 24degrees.  We rolled along through the shadows of the tall pine trees through  the marshy land and could tell as soon as we got to some dryer surroundings and the temperature started to increase.  Jamey was a hause for the first part of the day and again did a great deal of work.  I was perfectly content sitting in as I warm up and tried to talk myself into riding a bike.  After several hours we made our first stop of the morning and I was feeling good and ready to ride.  From this point on Jamey and I took turns rotating through on the front and kept the pace fairly high.  As I was pulling on the front I hit a rock and led to a front flat tire.  The group kept rolling and thanks to JJ, who graciously spent his day staring at our butts, I was back rolling with a spare front wheel  and chasing down the group at 35-40mph.  I rejoined and we finished out the day strong with the pace continuing to elevate for the last 10 miles.  All said and done it was a great weekend and the effort was nothing less than stellar.  Great work guys and keep it up!